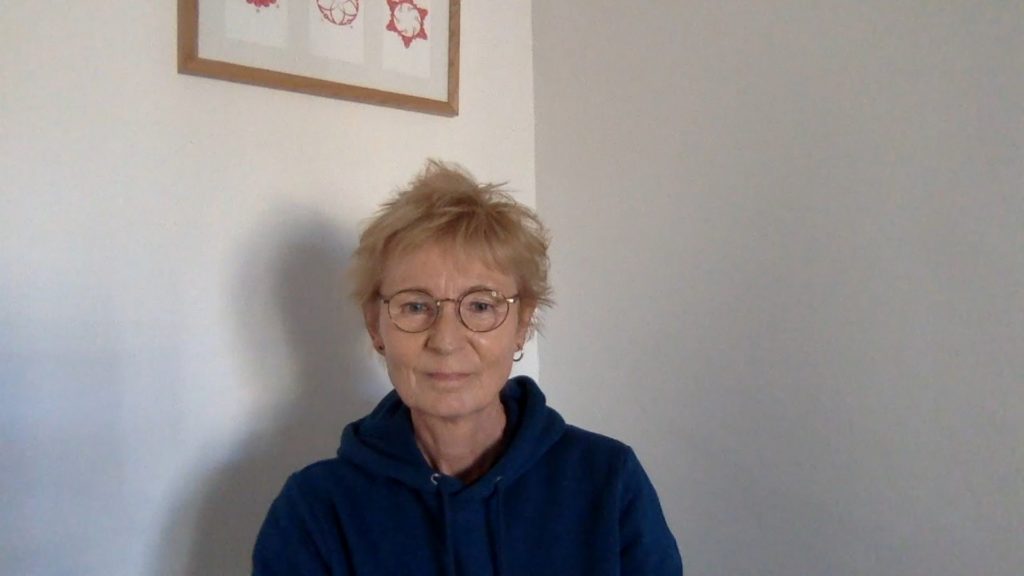 Handless Maiden – Second part of the story – with Rose Rylands

Rose Rylands continues the story of the Handless Maiden. Part of her monthly blog and video blog in the TA Earth series which looks at our relationship with the world around us.

Story of the Handless Maiden – part 2

For years she wandered in that forest, the Handless Maiden, every now and again when she was really starving, couldn’t even find berries or nuts to chew upon, a bird would come and drop a little bit of something. Just enough to keep her going.

She couldn’t believe it. It had been so long since she had stepped out of the trees. She saw the pears and had her heart set on one of those beautiful, beautiful, juicy pears.

Waters of the moat parted

It is said that that night, the waters of the moat parted for her. And with her long-held hunger, she approached the pear tree and took the pear in her mouth. She carried it back to the forest and ate that beautiful, juicy pear. It was nectar. After all those years living on almost nothing

The thing the King loved to do, the King used to come to the orchard every day and he used to count the fruit, the apples and the pears. It was just a thing he did. He loved to watch each one grow and change to when they were ready for picking and he counted them.

He came the next morning and was counting 101, 102 and turned to the gardener and said “One of the pears is missing, do you know anything about this? And the gardener told him what he’d seen the night before.

The King was so entranced by what the gardener had told him, he was so mystified, he said “Right, I have to see this for myself”.

The next night he waited. He waited in the garden. He hid and she came to the edge of the forest. As it was the night before, the water of the moat parted. This strange being that she had now become, thistle-haired, birds nesting on her shoulders, strange bits of wood coming out of her clothes. She’d become a strange, mystical forest being herself. Still no hands.

As she went to the pear tree, the King saw her as she really was. He instantly fell in love with her.

The King approached this strange, mystical, beautiful being. Very gently, very carefully. Although she was startled, he said “Its OK, its OK”, “I’m the king and I own this orchard, you are very welcome to eat the pears”. “You can have as many pears as you like”.

He said “I have a castle just here. I would really like you to come there with me”. “Let me take care of you”. “You’ll have every thing you need. Beautiful dresses, servants, rooms. You’ll have a home there and be safe. You can have a normal life again”.

So she agreed. She went with him back to the castle and all was as he had promised. Servants, fine things. Good food again. Pears.

When she was there she said “I can’t really run a castle without my hands”.

The King loved her so much, he went to his silversmith and had him make her a pair of fine, beautiful, silver hands and gave them to her. In due course the cloak of love wrapped itself around their shoulders, she fell in love with him and they were married. She fell pregnant. There was great joy in the castle.

During the pregnancy, she began to feel sad. The grieving returned because she wanted to be able to hold the baby
with her own warm, mother’s hands. She hid her sadness from the King. She knew how happy he was.

Right in the middle of her pregnancy, he was called away to war. The farewell was tragic. They loved each other deeply.
It was a terrible goodbye, never knowing if she would see him again.

He galloped away with his armies and she continued at the castle with her pregnancy. Over time she became more and more grief stricken about the fact that she didn’t have her own hands.

Eventually, she gave birth to a beautiful baby boy. Imagine her grief that she could not hold the child.
There was a great happiness that this baby was born she was still wracked with grief.

Return to the forest

Eventually, one night, she took the child and went back into the forest. For years, once again, she wandered in that forest. She and the child became part human, part animal. They were fed by the birds and helped by all manner of creatures. They wandered and wandered.

One day, suddenly, she saw smoke coming up out of the trees. To her enormous surprise, when she followed it, she found, in the middle of the forest, a great long house. An ancient cottage.

She went and knocked on the door. When the door opened, she was met by a silver haired woman. She looked at her and said “Ah, we’ve been waiting for you”. She opened the door and invited her in.

In the cottage there were other women, cooking, weaving, laughing, baking bread. The Handless Maiden stayed with those women. She raised her child in that house. Amongst the gossip and laughter and hand-made lives that they were all weaving.

What of the King?

One day when he too had bird nests on his shoulders, thistles in his hair and all the kingly attire had worn away, he was also a man of the forest. He also saw the smoke coming from the chimney. He found his way to that long house, that ancient cottage. Where the forest women dwell.

He knocked on the door and there they were. What he didn’t know was that during the time she was in that cottage,
over the years with the women baking, gossiping, cooking, weaving their hand-made lives, somehow, her hands had grown back. Bit by bit by bit, her real hands had grown back.

When the king and queen were re-united, she was able to cup his face in her warm hands.

As far as I know, they never went back to that gilded cage, that silvered castle, with all its trappings of wealth and affluence.

This story of the Handless Maiden draws to a close with the king and queen staying in the forest, in the long house with the hand-made lives that were woven there. Amongst the trees and the animals and the birds and they lived happily ever after.

If you have enjoyed the story of the Handless Maiden, take a look at Rose’s other vlogs in our TA Earth series. Rose is our resident storyteller and works as a professional storyteller in Whitby and Robin Hoods Bay on the North Yorkshire Coast.